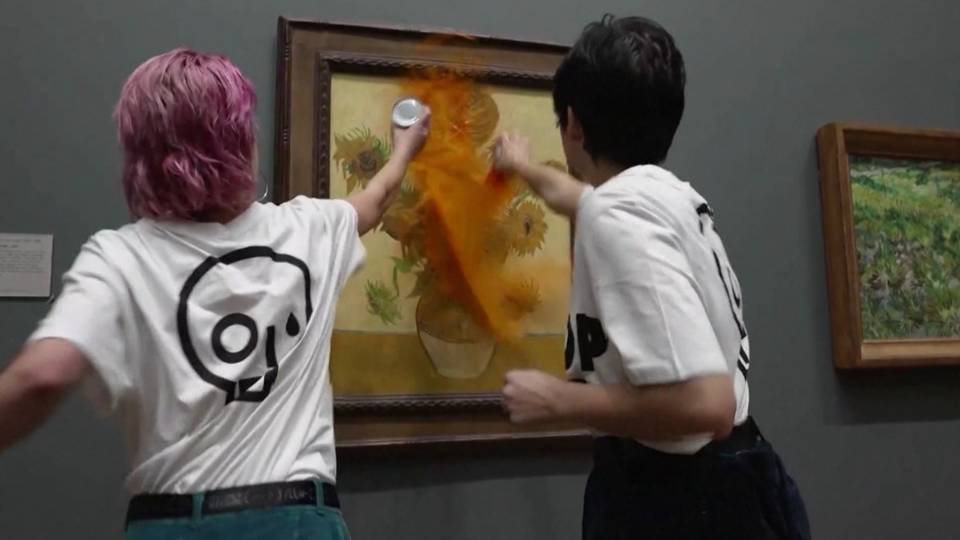 In Britain, two climate activists glued their hands to the walls of London’s National Gallery Friday to call out the U.K. government’s role in fueling the climate catastrophe. The activists from the group Just Stop Oil first flung two cans of soup onto Vincent Van Gogh’s “Sunflowers” painting, which was protected by a glass screen.

Meanwhile, protesters from the group Animal Rebellion poured milk onto the floors of grocery stores across the United Kingdom on Sunday, calling for a shift to a more sustainable, plant-based food system. Their protest came as the British government unveiled plans to further crack down on climate activists through a new “public order” bill that could also be used to break labor strikes.   Climate Crisis 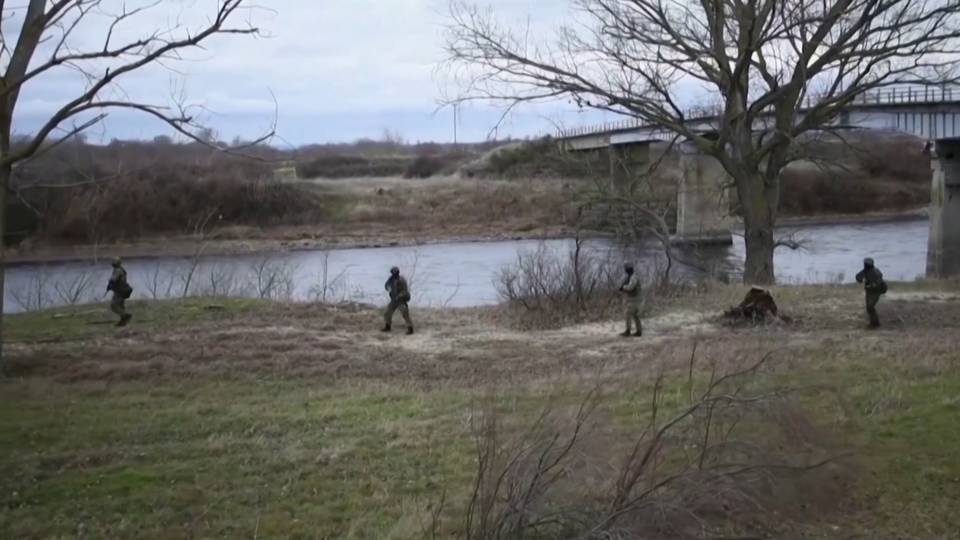 The United Nations has called for an investigation into the “cruel and degrading treatment” of 92 migrants who were discovered near the Turkish border by Greek authorities Friday, completely stripped of their clothes, some with injuries. Both Turkey and Greece have deflected responsibility and blamed the other side for the situation, though details of what happened remain unclear.     Refugees 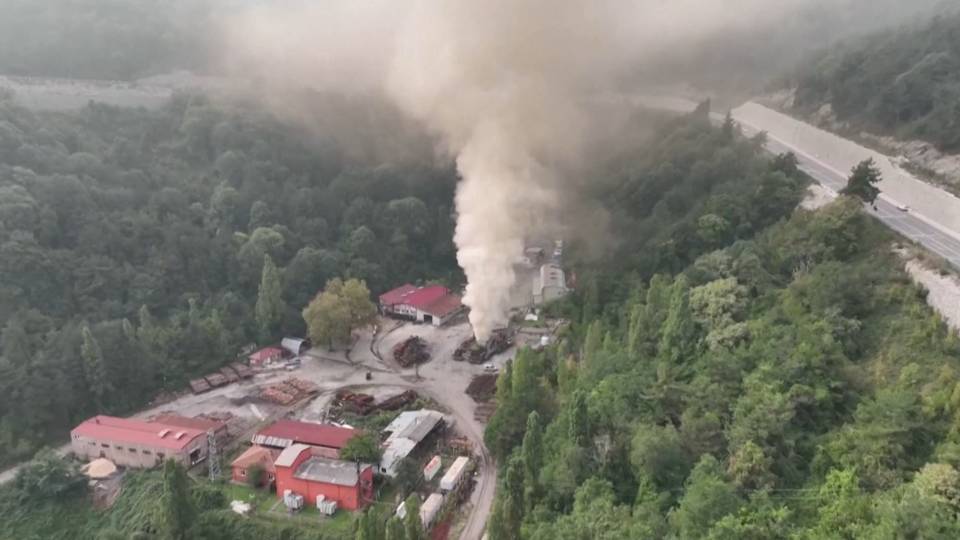 In Turkey, an explosion Friday at a coal mine in the northern Black Sea region killed at least 41 people. As Turkey mourned the victims over the weekend, union leaders and opposition politicians called out President Recep Tayyip Erdogan for blaming the deadly blast on “fate.” The explosion came as tensions were already running high in Turkey following the passage of a new bill press freedom groups say worsens censorship. The new law could land journalists and others in prison for up to three years if accused of spreading “disinformation.”   Turkey   Labor   Freedom of the Press 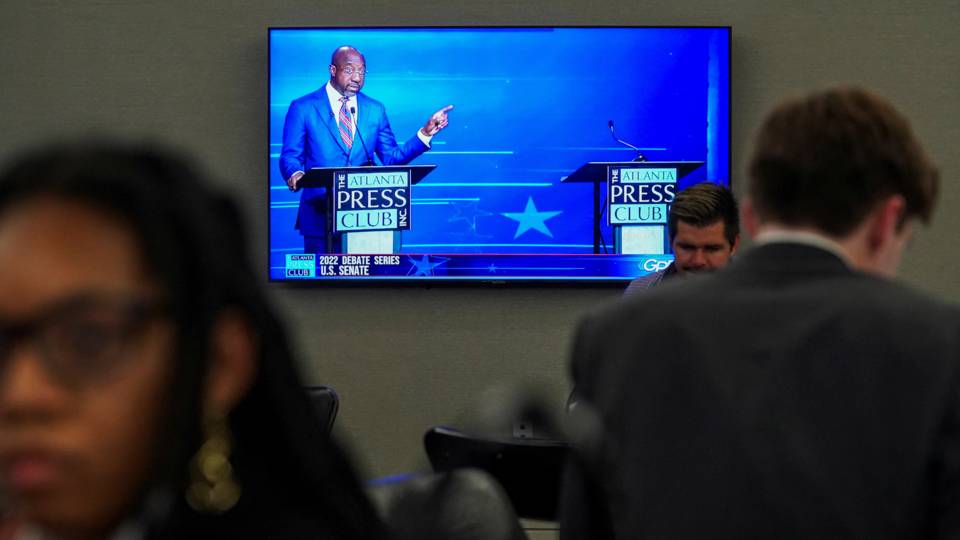 Democratic Senator Raphael Warnock debated Libertarian Senate candidate Chase Oliver in Atlanta, Georgia, on Sunday. Next to the two men stood an empty lectern for Republican candidate Herschel Walker, Senator Warnock’s main competitor, who refused to participate in the debate. The event came two days after Warnock and Walker faced off Friday night in what is expected to be their only debate. Walker was forced to defend his anti-abortion stance, after a former romantic partner recently said the ex-football player once paid for her to have an abortion and later urged her to terminate another pregnancy. She had the child. Walker has denied the claims. Senator Warnock, meanwhile, defended abortion rights in light of the recent reversal of Roe v. Wade.

Sen. Raphael Warnock: “A patient’s room is too narrow and small and cramped a space for a woman, her doctor and the United States government. We are witnessing right now what happens when politicians — most of them men — pile into patients’ rooms.”

Warnock and Walker also clashed over their positions on the police, Medicaid expansion and who they supported as the respective leaders of their parties.     2022 Election 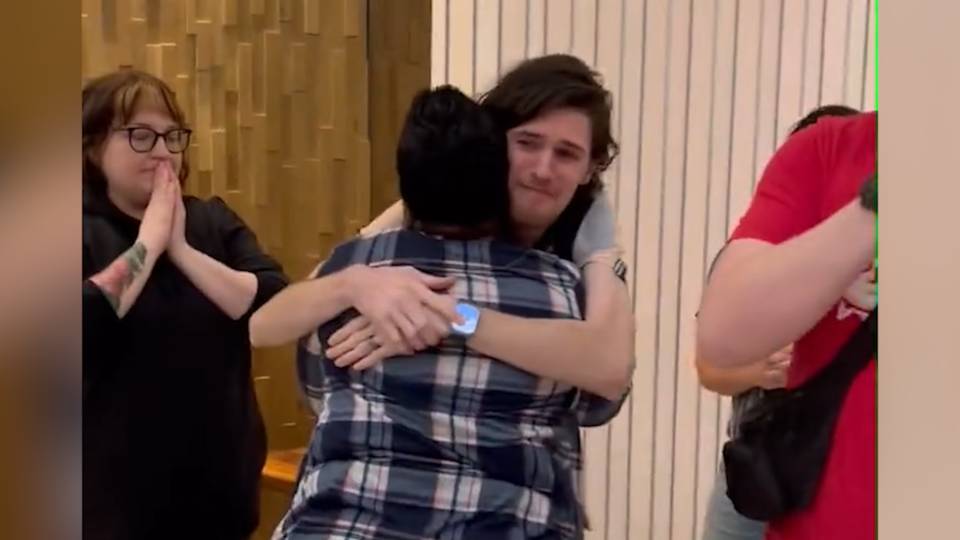 In labor news, workers at an Apple store in Oklahoma City voted Friday to join the Communication Workers of America, making them the second retail outlet of the tech giant to unionize. Senator Bernie Sanders celebrated the successful organizing campaign, tweeting, “Last year, Apple made a record $95 billion profit. Its billionaire CEO made $99 million in 2021. It’s time for Apple to treat its workers with respect.”   Unions Anti-nuclear activists gathered in front of dozens of congressional offices across the United States, at the United Nations and elsewhere to demand leaders “Defuse Nuclear War.” The protests coincided with the 60th anniversary of the Cuban Missile Crisis and as nuclear powers have been ratcheting up tensions amid the war in Ukraine. This is David Borris from the group Chicago Area Peace Action.

David Borris: “The mathematical possibility of a nuclear weapon being detonated by accident, by design is not zero. If it’s not zero, it’s inevitable.”

Get all the rest of today's headlines at Democracy Now!