In Brazil, supporters of far-right former President Jair Bolsonaro stormed the Congress, Supreme Court and presidential palace in the capital Brasília on Sunday. Police arrested over 400 of the rioters as they cleared them from the government buildings after the mob trashed offices, broke windows, and destroyed computer equipment and artwork that was on display. The attack came one week after the inauguration of returning President Luiz Inácio Lula da Silva, who spoke following the attack.

President Luiz Inácio Lula da Silva: “All those people who did this will be found and punished. They will realize that democracy guarantees the right to freedom and free speech, but it also demands that people respect the institutions created to strengthen democracy. And these people, these vandals, what could we say? They’re fanatical Nazis, fanatical fascists. They did what has never been done in this country.”

Bolsonaro supporters have refused to accept his election loss, and Bolsonaro never formally conceded, instead leaving Brazil for Florida, as some U.S. lawmakers are now calling for him to be extradited. Brazil’s Supreme Court ordered all pro-Bolsonaro protest camps around the country to be dismantled within 24 hours, for roadblocks to be lifted, and for police to arrest any protesters defying the orders. The court also suspended the governor of Brasília as security flaws around the government buildings are investigated. As nations around the world condemned the attack, the day’s events drew immediate comparisons to the January 6, 2021, Capitol insurrection in Washington, D.C. In El Paso, Texas, President Biden visited the U.S.-Mexico border Sunday for the first time since taking office two years ago. Biden briefly toured a migrant shelter, where he did not meet with any migrants. The president instead met with Border Patrol agents, congressmembers and local officials, including Texas Republican Governor Greg Abbott, who continues to intensify his anti-immigrant hate speech. Abbott handed Biden a letter with a list of demands on border enforcement. Biden’s trip to El Paso came just days after announcing another extension of the Trump-era Title 42 pandemic policy to block Haitian, Cuban and Nicaraguan migrants apprehended in the southern border from seeking asylum.

McCarthy Voted House Speaker After 15 Rounds, a Near Brawl, and His Power Significantly Diminished 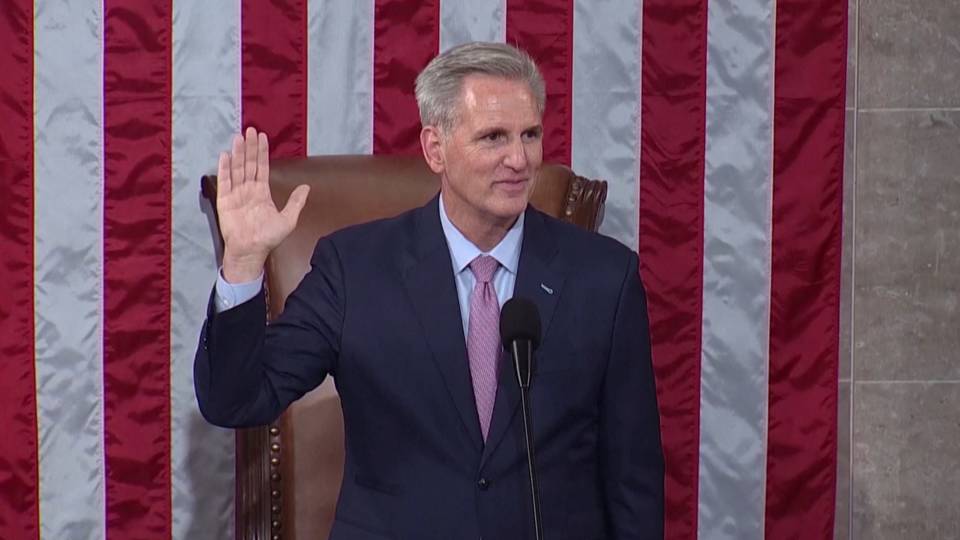 California Republican Kevin McCarthy was elected as speaker of the House of Representatives in the early hours of Saturday, after a historic 15 rounds of voting. McCarthy was forced to make a flurry of concessions to the hard-right faction of his party, which will hold significant power in the new Congress.

One of the most dramatic moments in the drawn-out process came during the 14th round of voting Friday, when Congressmember Matt Gaetz refused to vote for McCarthy, instead voting “present,” leaving the embattled Republican leader one vote short of a victory and prompting an angry Mike Rogers of Alabama, a fellow Republican, to yell and lunge at Gaetz before he was restrained by North Carolina Congressmember Richard Hudson.

McCarthy was eventually elected on the 15th ballot with 216 votes to 212 for Democratic Leader Hakeem Jeffries. Six Republicans did not vote for McCarthy, instead casting “present” votes, which was enough to secure McCarthy’s victory. After the four-day saga wrapped up, McCarthy credited former President Trump with helping him clinch the speakership.

Speaker Kevin McCarthy: “But I do want to especially thank President Trump. I don’t think you should doubt — anybody should doubt his influence. He was with me from the beginning. Somebody wrote the doubt of whether he was there. And he was all in.” Kevin McCarthy’s election meant the House was finally able to swear in lawmakers Saturday. They included New York Republican George Santos, who is being investigated over his finances and for completely fabricating large portions of his résumé and his life history. Before taking his oath of office, Santos was seen making a hand gesture that many have called out as a white supremacist symbol during the 10th round of voting for speaker. New York Democrat Jamaal Bowman tweeted, “We’ve all been laughing at Santos for lying his way to Congress. This time it ain’t funny. He and every other white supremacist in Congress need to be expelled immediately.” 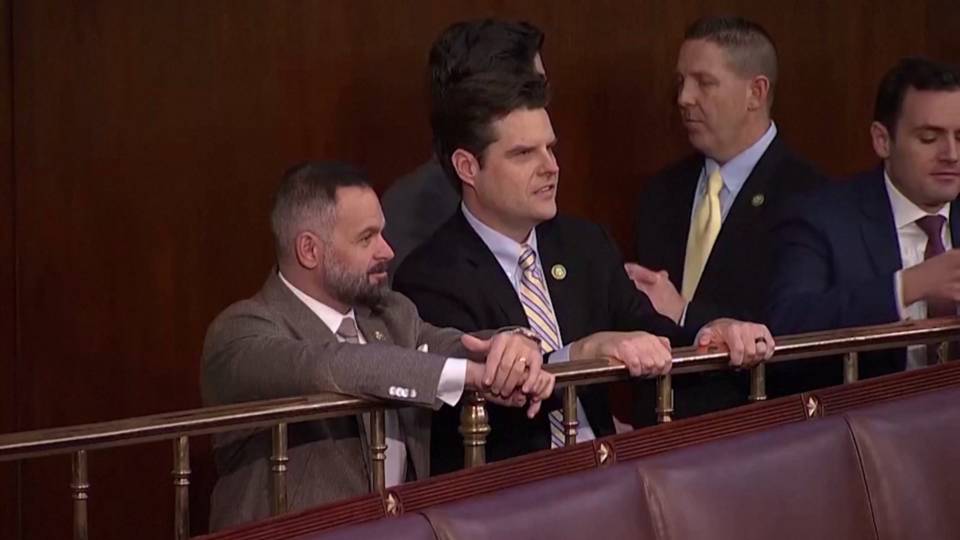 As House members prepare to vote on a new rules package today, some Republicans say they will withhold their vote unless full details are shared of the concessions made by McCarthy to far-right lawmakers. Some of the known deals include allowing a single Republican lawmaker to force a “motion to vacate” McCarthy’s position as speaker, and a provision allowing lawmakers to propose amendments to appropriations bills, that could defund programs Republicans oppose.

The rules package would also gut the Office of Congressional Ethics, barring it from hiring new staffers while retroactively imposing term limits on members of its board — which would remove three of four Democrats. Republicans also plan to eliminate labor unions of congressional staffers, after the Congressional Workers Union negotiated its first-ever contract just last month. China lifted nearly all its travel restrictions Sunday after three years of relative isolation since the start of the COVID pandemic. Incoming travelers no longer need to quarantine upon arrival. China also opened its land and sea borders with Hong Kong, as tens of thousands of people streamed to and from the mainland.

Teresa Chow: “I am so happy, so happy, so excited. I haven’t seen my parents for many years. My parents are not in good health, and I couldn’t go back to see them even when they had colon cancer. So I’m really happy to go back and see them now.”

This comes amid a massive coronavirus surge in China since the rollback of its “zero-COVID” policy. The recent spike in deaths of celebrities and public figures has sowed further doubt about the reliability of official COVID reports, even as their causes of death have not been confirmed. Forty-year-old opera singer Chu Lanlan and screenwriter Ni Zhen, who wrote the acclaimed film “Raise the Red Lantern,” are among the recently deceased. The U.N. and others have called out Beijing for underrepresenting the country’s true COVID toll after it stopped publishing daily data. In Kenya, a prominent LGBTQ activist, Edwin Chiloba, was found murdered and left in a metal box by a roadside near the town of Eldoret. Four suspects have been arrested. Same-sex intercourse is punishable in Kenya by up to 14 years in prison, and discrimination against the LGBTQ community is still widespread. Edwin Chiloba’s sister spoke out after her brother’s body was found.

Melvin Faith: “He told me this would be the greatest year for him. I did not know that he was going to get killed. I am really shocked. For those people who did it, I pray for justice. I am appealing to the government to investigate this. He was a boy with dreams.” 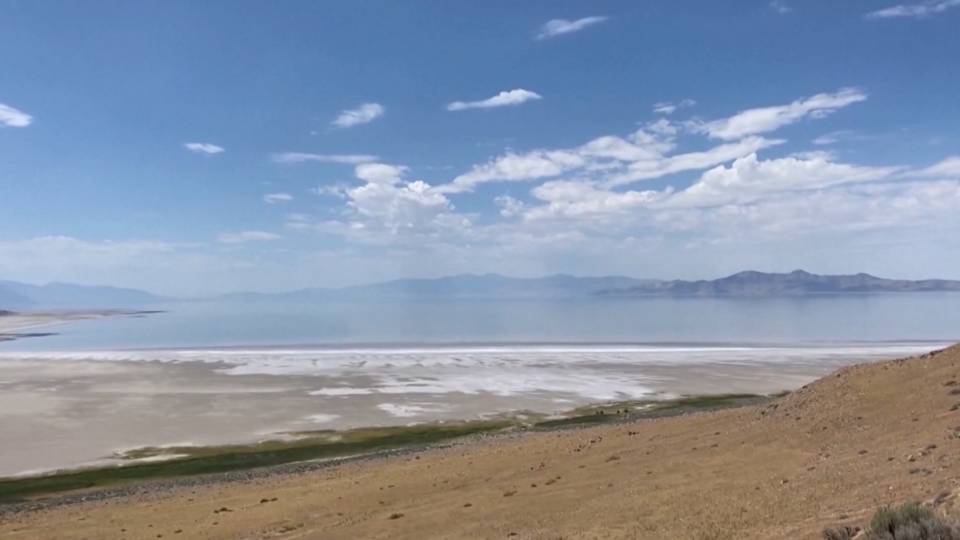 In climate news, a new report finds human activity is causing Utah’s Great Salt Lake to shrink far faster than previously believed, and that without dramatic cuts to water consumption in the American West, the lake could disappear entirely in the next five years. Since 2020, the lake has lost 40 billion gallons of water each year, and now holds just 37% of its normal volume. It’s currently about 4 degrees Fahrenheit warmer than it was in the early 1900s. Researchers warn the dry lake bed threatens to expose millions of people to toxic dust that could increase rates of asthma, heart disease and other ailments. Here in New York, over 7,000 nurses went on strike early this morning after failing to reach a new contract agreement with Mount Sinai Hospital and Montefiore Medical Center. Nurses are demanding higher wages, a stop to benefit cuts, and for more staff to be hired to treat a growing number of patients. The nurses are also denouncing the inhumane treatment of patients, as some have been forced to receive medical care in hospital hallways due to overcrowding. In a statement, the New York State Nurses Association urged people to continue seeking the care they need, writing, “We appreciate solidarity from our patients — but going into the hospital to get the care you need is NOT crossing our strike line … We are out here so we can provide better patient care to you!” 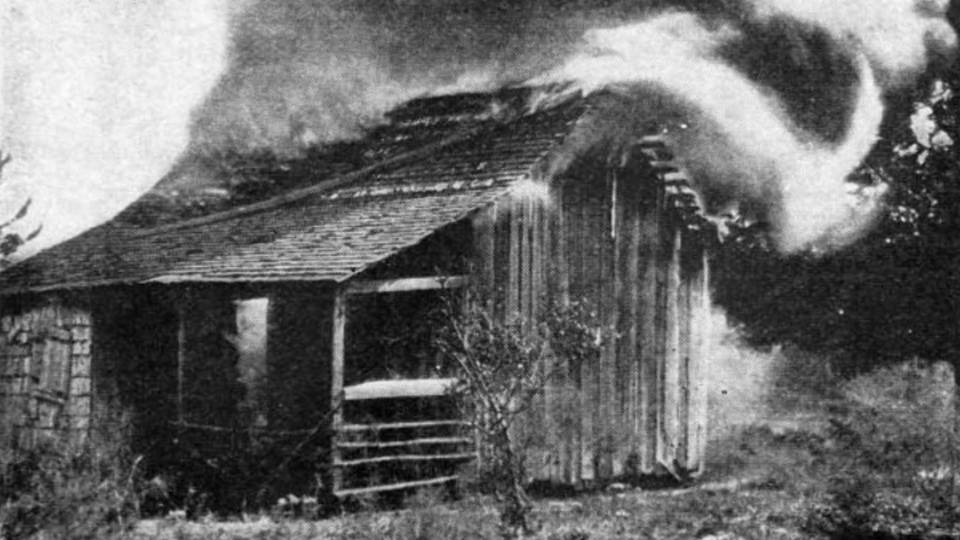 In Florida, the descendants of Black people who survived racial violence in the town of Rosewood gathered over the weekend to commemorate the 100th anniversary of the massacre. Over the course of several days in January of 1923, a white mob razed the homes of Black families, murdering at least six people and forcing others to flee. Many eyewitnesses said the true death toll was far higher. The violence began after a white woman accused a Black man of assault. In 1994, Florida lawmakers approved $2 million in compensation for nine survivors and dozens of descendants of the attack. According to the Southern Poverty Law Center, they were the only government reparations ever paid to victims of anti-Black racial violence in the U.S.